It was event four of the scratch cup series and it took the players to Erins Isle. The course was in pristine condition but sadly the weather was anything but, as squally winds & heavy downpours greeted the players, the crowds unsurprisingly was down on the opening three events, but the big guns were out in force looking to make an impression. Stephen Murray lead the series by an impressive 17 points after his wins in Old County and Glenville and home favourite Paul Nolan lying 2nd was hoping to close the gap and make local knowledge count. Of the early starters, Chris Gallagher was the early pace setter with a 48. This was to lead the 1st round scores for most of the day with Chris adding a 53 to finish on 103. Chris playing partner Graham Flanagan was also to finish on 103 and they were later joined by Junior Smith recording a 53 and 50. The morning session also saw a very unusual occurance with two players from the same three ball opening their round with a hole in one on the 1st hole, Aaron O’ Droighneain was one of them and it helped catapult Aaron to the head of the leaderboard on 103. That score would be good enough to give Aaron the best Inter prize. Into the afternoon session and Declan McConville from Cloghogue  back playing after an extended break from the game finished on 102. The bruff trio of Tom Hanly, Pacelli Darcy and Liam O’Donovan all made the trip to West Dublin and Darcy & Hanly both shot scores to earn them a top 12 spot and a place in the play-off. The favourite Paul Nolan was to rue a few missed putts but his score of 101 was more than enough to put him in the mix and he was later joined by the points pacesetter Stephen Murray who added a 50 to his first round of 51. Ian Dillon has been the model of consistency in the series so far making the cut in all four venues and his score of 100 gave him every chance of a podium finish on Sunday. Keith Redmond too showed a return to form and he joined Ian at the head of affairs with a 100. The leading duo were the defending champion JR Crangle and Shandon’s Mark Millar. Millar had earlier shot an astounding 44 in the windy 1st round conditions. He eventually finished on 97 for a two shot cushion.
In the final 14. the host club were well represented with Jim McLaughlin & Dave Donnelly joining Nolan in the play-off. Jim looked like he might win the last 18 prize with a 48, however Bruff’s Pacelli Darcy was to take that honour defeating Stephen Murray on the back nine with a 47. In the leading pack, Millar extended his lead and eventually secured a three shot win. Redmond was to outscore Crangle by a shot and that was enough to land the Matchplay champion the runner up spot and confirm a 1 -2 for the Shandon club. JR Crangle made a very good defense and ended up in third. There was no joy for the EI trio, however Paddy Delaney ensured they didn’t go home empty handed winning the junior prize. Maree O’Toole from Shandon continued her fine season winning the Ladies Prize.
In the points table Stephen Murray has extended his lead at the top to 19 points with Paul Nolan now in 2nd and Gavin Carty despite missing yesterday’s event still lies third. However Millar is up to 6th place and with Shandon next on the list, he will have high hopes of closing that gap further.  Maree O’Toole extends her lead in the ladies to 4 points over Siobhan Keely with Linda Thompson and Ger Holland lying third.
You can catch up with all the build up to Shandon and see the full leaderboard from the Erins Isle event by checking out the dedicated scratch cup site. http://www.dublinscratchcupseries.com. 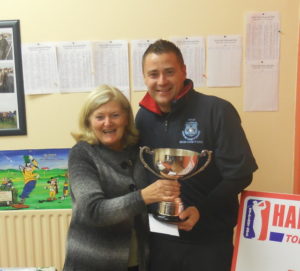