The Leinster Inter Counties took place at a showery Collinstown on Sunday. The weather played a big part in proceedings with heavy downpours a feature throughout the day playing havoc for the players. The ladies were first into action and it saw a welcome return to the Inter County scene for Philo Condron. The championship consisted of 5 counties but in reality it was always going to be a straight shootout between Dublin and Kildare.
Philo partnered Linda Thomson in the scotch foursomes and they shot an excellent 48. Siobhan Keely and captain Maree o’Toole shot a steady 52 but the Portmarnock duo of Ger & Sheelagh really lit up the show with a fabulous 44. The score of -18 left them two shots shy of Kildare who shot an impressive -20.
In the singles, Philo & Linda continued their fine form adding 53’s. Maree & Siobhan struggled in the showery conditions and carded 56 and 59, but the rock’s of the team Sheelagh and Ger carded 51’s to set a competitive score for Kildare to chase. In truth it looked like it might not be enough, but the Lilywhites were struggling in the equally tough conditions and when the ever reliable Chrissie Byrne carded a 57, it looked like the  Dublin score might be enough. In the end there was little to choose between the counties with the final Kildare player on the course and sadly for Marian Byrne an untidy finish was to cost them the title and deliver an excellent win for the Dubs. It was a great performance and the perfect boost for the All Ireland in 4 weeks time.
The gents faced a lengthy wait to tee off with the weather delaying the planned program but it did not phase former club mates Keith Redmond and Mark Millar. The experience of Millar coupled with the enthusiasm of Redmond was paying dividends as they reach the turn in 21 (-6). They played the back nine with equal vigour and posted a superb 44 to start the challenge in fine style. The 2nd pairing of Captain Chris Gallagher and Junior Smith were finding birdies far harder to come by and they looked like they were heading for a very average rounds of scotch foursomes but they finished strongly over the closing holes to finish with a healthy 49. Likewise JR Crangle and George McGreal had their fair share of missed putts on the opening nine but they bounced back well to finish with a 48. Their score of -21 was to leave them 11 shots adrift of the host Westmeath who were very impressive over the Collinstown track.
In the singles, Mark Millar started strongly as well and looked like he might shoot a really low score but missed a few over the closing holes but still finished with a 48. Keith Redmond showed no nerves all day and in truth was relishing the new experience of Inter County pitch & putt. His pitching was pin point and he sunk a good percentage of his chances to finish with a 47. The duo of Chris & Junior were again finding it tough to get the ball in the hole, but they continued to fight and scores of 50 and 51 were by no means poor on this difficult day. George McGreal had a nightmare start in his singles +2 after 4, but George battled back to level after 10 and added four further birdies to salvage the situation. JR Cut a frustrated figure during the day as a succession of putts slide by the hole but his class eventually told and a score of 49 was added to the Dublin total. The final score of -50 was a decent effort but never looked to be enough and so it proved. West Meath really got to work and despite the pressure of playing at home and suffering disappointment in the singles in the past, they made it count this time and delivered to a passionate home crowd. Louth at times in the singles looked like they might hold onto their crown, but they missed a few crucial putts and it allowed West Meath to deservedly capture the title. Well played to them.
All told not a bad weekend with success for our Ladies and Under 16 team. Our Gents did not quite hit top form on the day but with a month to prepare for the Tullamore showdown, they will not be too despondent and still believe they can end that long wait for the national title. A Big thanks to all the supporters who traveled down to Collinstown to support both teams. It was much appreciated. 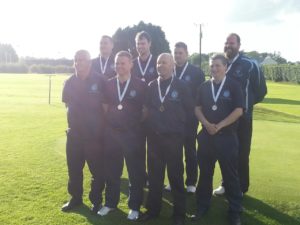