The Ladies Strokeplay final took place at a sun drenched Old County at the weekend.On Saturday the Ladies junior championship was on the line and for the winner the Eamonn Birchall Cup.There was 18 players in the field with the home club well represented. It was the Old County Lady Captain Ann O’Shea who led the way on 65 after 18 holes and she was later joined by Glenville’s Catherine Fox (Glenville) who equalled that score. Glenville’s captain Irene Finnegan was a further shot back.It looked like the title would be decided between these three but with the hard conditions scoring was tough and one hole could make or break a card. Ann added a 2nd 65 to take the overall lead on 130 and for a few groups it looked like that would be enough but then home player Deirdre Curren took over after a great 2nd round of 60 this gave Deirdre a total of 128. It was all down to Catherine Fox or so we thought Catherine was in the final group and we wondered if she could better Deirdre’s score, but unknown to us the real challenge was coming from another member of that trio in Marie Daniel. The local player a mere 87 years young, shot a 2nd round 59 and finished on 129 just one shy of Deirdre. It was a brilliant finish to a great day and the home club had plenty to  cheer about.On Sunday the players in general were sparred the blazing sun but it was still hot for those in action and they required plenty of water as they took on the tricky course. In the opening pairing was the former Junior champion Christine O’Reilly a two time winner in ’09 and ’10. She shot a 58 which proved the best of the 1st round, this was matched by another home player Laura Whelan and Glenville’s Antoinette Campbell who had a terrific hole in one on the 12th, the final member of the quartet leading the way was Ring Common’s Marie Shiels. There was quite a few on 59 and 60’s and so it was all to play for in the 2nd round.Christine added a further 58 and it looked like it might be enough to land her another Dublin title as both Antoinette and Laura were unable to better that score. Then former champ Agnes Redmond having shot 60 in her 1st round finished superbly with two birdies in the last three holes to finish on 55 and pip Christine by a shot. There was now great excitement among locals that another title was heading to Old County. However they had not counted on Marie Shiels. The Ring Common player was runner up at the Dublin Matchplay in Shandon last month and this time she made no mistake adding a solid 56 in the 2nd round and that was enough to win her the title by a single shot. The Ring Common ladies made their mark in the Dublin leagues two years ago and now they have a Dublin champion as well.
The senior championship was expected to be a one horse race and although there was no surprise with the overall winner, things were tighter than expected.The defending champion and fifteen times national champion Ger Ward was the leader after 18 but a joint leader with compatriot Sheelagh Elmes on level par. Ger Holland was lying just one shot back, Siobhan Keely and Pauline Balfe were also in contention. The big surprise was the young Old County player Claire Keatinge had endured a difficult opening round and was out of contention. In the 2nd 18 Pauline Balfe played superbly to add a 54 to her earlier 57 to take the lead on 111.Sheelagh Elmes and Siobhan Keely matched the total but were unable to pip Paulne for second. Ger continued her long run of victories in this event and she added a 52 in the 2nd round to win it by five shots. It was a fitting end to a wonderful weekend of Pitch N’ Putt. In separate speeches, both Peg Smith and Ger Ward pleaded with the ladies to get involved support these championships and get involved with the inter county trials. Both realise despite the skill of Ger, the depth is not as deep as the Dublin board would like.
Dublin Ladies Junior Championship:
Winner: Deirdre Curren (Old County) 128
Runner Up: Marie Daniel (Old County) 129
Dublin Ladies Inter Championship:
Winner: Marie Shiels (Ring Common) 114
Runner up: Agnes Redmond(Old County) 115
Dublin Ladies Senior Championship:
Winner: Ger Ward (Portmarnock) 106
Runner up: Pauline Balfe(Old County) 111 (o.b.18) 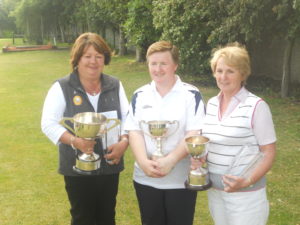 Last Sunday 28th June saw the Leinster stroke play ladies and gents take place. The ladies was held in Bagnelstown and in the senior section Ger Ward was runner with

The below message has been issued by PPI President Mervyn Cooney. All Dublin clubs and registered players please take note and please adhere to the guidelines. At a time when