An early indicator into Ger’s form, came in a 1st round romp over Philo Condron. She then dispatched Mary Quinn on Sunday afternoon before reaching the semi finals on Monday where she would face fellow Dub Ger Holland who had won a tight encounter with Helen Wynne before a good win against Sheelagh Elmes.

Ward though was not for stopping and won the semi final in comfortable fashion and she now faced a regular rival of hers Chrissie Byrne in the final. Ger was off to a good start but Chrissie was turning things around in a high quality final.

By the time they reached the 35th it was Chrissie holding all the aces but Ger is made of stern stuff and birdied to make it a level game going down the last. Ger used all her experience and knowledge to pitch a superb shot to just under 3ft and uphill. Chrissie had a longer and tougher putt which she missed slightly on the low side. Ger though was to make no mistake and coolly slotted her putt home and make it an astonishing hat-trick of hat-trick wins!

Her third Irish Matchplay title in a row just like she had done previously in 1984-86 & 1992-94. She also became one of a handful of players to win All Ireland Strokeplay, Inter-County and Matchplay on the same course.

The men’s event was deservedly won by Cork’s Bryan Delaney who was in fine form all weekend and showed great heart along with quality whrn he looked beaten in a couple of his encounters. He also took the title on the final hole, beating Ray Murphy. Dublin’s best performers could only manage to make it to round 3 as Junior Smith, Chris Gallagher and JR Crangle all fell to players that all made the semi-finals.

We were also out of luck in the Nett Ladies event as Tipperarys Elaine Quinn took the honours. Finally a huge thank you to the Tullamore Club who were fantastic hosts to a quality championships, the NEC for the live feeds and updates and of course the supporters from Dublin who cheered on all players throughout the weekend. 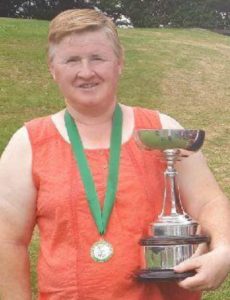