There was a great buzz of anticipation at a windy Erins Isle on Saturday as the 1st meeting of Dublin – WestMeath at Inter & Junior level took place. There was four scotch foursomes ties in the Inter challenge and three in junior one and in both events, Dublin lead the way at half way by nine shots in the Inter event and seven shots in the junior challenge. The pairings of Dave Donnelly (EI) and Liam O’Reilly with 46 points and Charlie Egan(EI) and Dave Hayden II (Lucan) with 45 points were the catalyst for the Inter team to lead. Into the singles and the Inter pairings continued to shine with Glenn Woodward scoring best on 39 points and both Trevor Heffernan and Dave Donnelly following closely on 38 points. In the end the guys won the Challenge by thirty shots, in truth the West Meath side was a weakened side and the Dubs can expect to face a far tougher challenge in Lough Owel in the County Challenge on September 28th.

The junior singles saw West Meath roar back, Anthony Parsons (OC) was the only Dub to break par with 38 points and West Meath overtook the hosts to win the challenge by two shots.
Dublin Captain Rob Ryan said he was delighted that this event had taken place and said he hoped it would be the start of an annual event at this level. He thanked WEst Meath captain David Corcoran & his team for making the trip to the capital and said he is very much looking forward to the County Challenge in Lough Owel when the two sides lock horns. Rob thanked Erins Isle for allowing them to host the challenge. He gave special mention to Charlie Egan and James Corcoran for their hard work in allowing this event to go ahead.  West Meaths Gary Middleton received the perpetual trophy for the Junior event on behalf of his county and he thanked the Dublin Team for their hospitality.
The Dublin teams next outing will take them to OLd County on September 14th for a match with Old County before their date with destiny in Lough Owel on September 28th. They will hope to have god support from within the capital on that date. 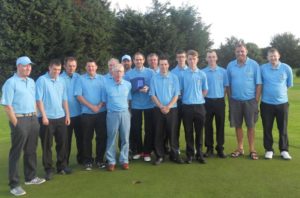