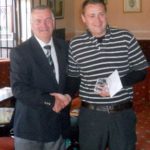 Our sponsor Payzone will be making a presentation to us on a solution they have that helps clubs/societies such as ourselves become more cashless. Ciara Donovan from Payzone will be

Over the past weekend the action came thick and fast as action place all around the province with National Mixed Foursomes Qualifiers, Scratch Cups and All Ireland titles all taking