The Dublin Matchplay finals took place at a sun drenched RGSC on Sunday. There was twenty four players standing on Sunday morning but by 2.30 there was just six winners to be crowned. The Ladies Junior final was an all RGSC affair as Nell Moore was up against Audrey Murphy. It was to be a closely contested affair but Nell was to prove just to strong and won the title on the 32nd after an excellent three saw her maintain her 5up lead. Nell was delighted with the win and thanked Peg Smith who encouraged so many of the Ladies Junior players to take part and it had proved a worthwhile exercise. 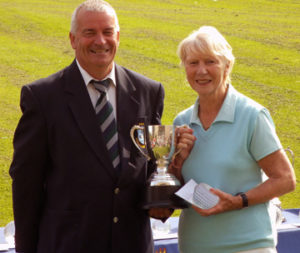 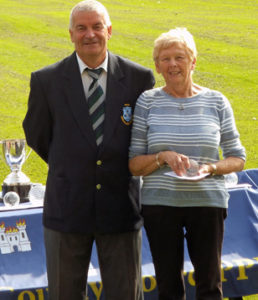 In the gents junior we saw a new name come to the fold. Gary Walsh from CPM  was drafted into the CPM League team during their run to the final and it stood him in good stead against Lucan’s Dave Lee. Dave had earlier been involved in a titantic struggle with his Dublin teammate Luke Birrell and had won on the 18th. Gary though got on the front foot from the start and was 6up through 18. Gary maintained that lead through the  opening nine holes of the second round and despite a mini revival from Dave, he had left it too late and Gary had pulled off a stunning win. In his very polished speech, Gary was delighted with the win and paid tribute to his mentor Paddy Gorey for all his help in making today happen. 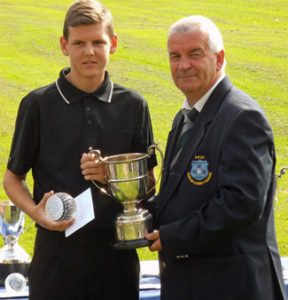 The Ladies Inter final saw CYMC’s Eileen Nolan up against Loughlinstown’s Betty Cody. Eileen is no stranger to these finals and has tasted success in the past but her most recent experiences have been to finish runner up in ’07 and ’12 to Shandon duo Mary Casey and Mary Fullam. Thankfully for Eileen it was a case of third time lucky for the popular Fairview lady as she got a good early start on Betty and managed to maintain it throughout. Betty though is a real fighter and she almost brought it down the last, but Eileen rolled in a putt on the 35th to seal the win.

The Gents Inter final was an all Lucan affair, Dave Hayden II and Sean Gallagher have both been crowned Dublin Inter Strokeplay champions in ’08 and ’12, but both were chasing their 1st matchplay title. Dave had come through a tough section of the draw seeing off the likes of Paul Dillon and Glenn Woodward. The early holes were very tight with little between the players. Dave though crucially sunk birdies at 17 and 18 to lead by 2 at the half way point. Sean though fought back and was soon level. The guys were inseparable for several holes, but crucially Sean moved ahead on the 33rd and try as he might Dave was unable to recover the  situation and Sean won on the 36th. Sean had taken a break from the game after his successes in 2012 and it looks like it has served him well and his game is still as good as it was when he left.

The Ladies Senior Final pitted Ger Ward against Vera Glennon. Most players up against Ger at county level come off second best and many predicted a handsome win for the Portmarnock star. The opening round was very tight and Ger was regularly just one in front. However in the 2nd round, Ger moved through  the gears as Vera tired. Ger was to seal the win on the 29th. It was yet another championship crown for Ger. The Matchplay is one she has missed out on in recent years but was delighted to once again get her name on the trophy and complete another Dublin double. A great effort from Vera who had earlier beaten her clubmate Pauline Balfe in the semi-finals. 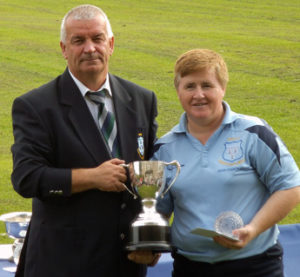 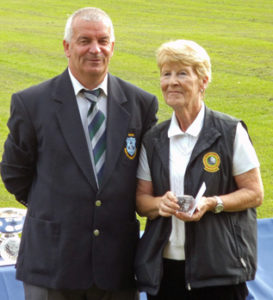 The Gents Senior final saw an all Lucan affair as well. On Sunday morning of the four remaining players, David Hayden was the only one not to get his name on the cup. Dave later said he knew he was chasing a piece of history and having made it through the early rounds on Saturday, he did not sleep too well on Saturday night pondering what the day ahead might hold. He eased through his semi-final against two time winner George McGreal on the 14th hole. The other semi was a far closer affair with Dublin teammatees Keith Redmond and Gary Healy going the distance. Keith emerging the victor on the 18th.
In the final, the early holes saw the  players stay level, then Keith moved ahead through the middle holes, but Dave responded in style to win three holes on the bounce and move ahead. Keith was pitching well but unlike in his semi-final, he was finding the holes hard to find, by contrast, Dave was putting majestically. Keith temporarily reduced the arrears but Dave was soon back on the front foot and the end came early with Dave winning on the 30th. The win completed the Golden slam for Dave as he had now won all three major Strokeplay and Matchplay championships, a simply outstanding achievement. Dave in his speech said of the 38 years he had been playing the game, this was his best day. He was overjoyed to have finally won the one title to have eluded him through his carear. He paid tribute to Keith on the composure he had shown despite his putting not working throughout the final. The County board chairman too paid tribute to Keith on his performances last Sunday in Tullamore and the great effort he had made to try to defend his title. 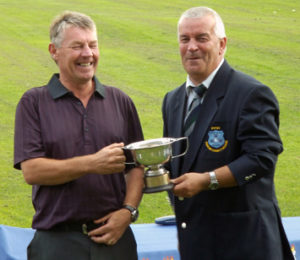 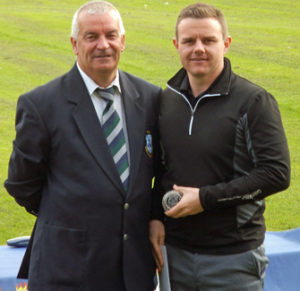 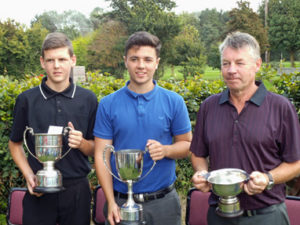 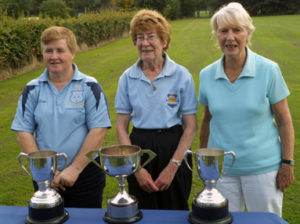 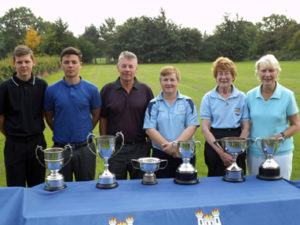