Mark Millar showed great resolve and steel under pressure to win the John Smith Cup for the 1st time and become the 5th different winner in 5 years. Mark who was out of sorts at last weekend’s matchplay in Parteen rediscovered his top form after a slow start. Millar started with a 48 in his opening round six adrift of the early leaders Gary Healy, Joe Joyce and Junior Smith. Millar was in a strong three ball of JR Crangle and Jim McLaughlin. Crangle shot 47 and McLaughlin a 46 in their opening rounds, but as they struggled in the 2nd round, Mark really found form with a 45 memories of his fantastic 44 he shot in Erins Isle last September. The 2nd 18 was enough to give Mark a two shot lead over Chris Gallagher and John Dennis. A further five players lay on -12 with Tom Hanly and Paul Nolan on -11. The last two to make the final 12 was Paudge Donohoe and Darren Thornberry. The final 18 was a classic encounter with none of the players pulling away. In fact with just a few holes to go eight players were still in with a chance of winning. However Mark Millar found the extra gear when he needed it to birdie two holes on the back nine and win by two shots. Five players all finished on -16 but it was Darren Thornberry who finished 2nd by virtue of an excellent 48. Gary Healy narrowly missed out on 2nd after a missed putt on the 18th, but he did secure 3rd and there was home success with Paudge Donohoe final round of 49 enough to win him the last 18 prize.
In the other grades, Lucan’s Damien Creevey was one of three players to finish on 100 but he edged out the other two on the back 18. Long Meadow’s Eric Doyle once again proved the best junior after his score of 109. Tracey McGrath is proving herself the lady to beat in the Ladies 0-10, despite strong challenges by Chrissie Byrne and Sheelagh Elmes, Tracey finished well to win by a shot.
Sadly there was no Ladies 11-18 taking part, but the day was well supported and the weather responded accordingly. John Smith was on hand to present the cup to a delighted Mark Millar who is now back to his best and looks well on his way to another place on the Inter County team.
The next stop on the Dublin Circuit will be Under 16 Strokeplay finals in Old County on June 21st. For the Adults the Leinster & All Ireland qualifiers take centre stage on 3rd and 4th week of June before the Dublin Gents Strokeplay finals on July 05th and 06th in Erins Isle. 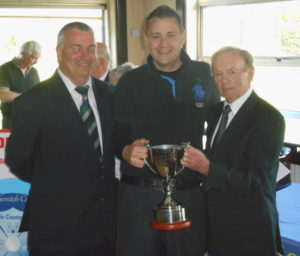