August 7, 2017August 7, 2017 | adminadmin | 0 Comment | 9:09 am
Yesterday in Ringcommons with some decent weather conditions, the Dublin County Board Des Flanagan Mixed Foursomes took place.
The scoring was fairly hot from the start with a super 48pts from Jimmy and Rosaleen Thompson taking the early lead. They though slowed down a little in the 2nd round and they would eventually have to settle for the runner up spot as the pressure was turned on by the Glenville duo of Frank Connolly & Stella Sheridan as they took the victory.
The 1st 18 prize was won by Lucans Brendan and Dora Keane. The 2nd 18 was a victory for the host club Ringcommons as William Rodgers and Teresa Boland took the prize. RGSC also had players in the winners enclosure as Darren Thornberry and Ger Holland took the Gross prize.
A great victory for Frank & Stella who have a tremendous record in these Mixed Competitions and they will be gunning for another victory in Lucan in 3wks time in the National Mixed Foursomes.
Thank you to Ringcommons for looking after us and producing a super course on the day. 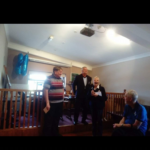 Lucan and CPM served up a match high in drama & entertainment in a packed Glenville on Tuesday night. The same two teams had battled it out in the 2013