The beautiful Portmarnock course stood up brilliantly, from the recent bad weather, to hold the first Dublin Championship of the season. As with a links course, the wind blew and made it tricky for competitors but it didn’t stop the great shots and ultimate scoring of the winners on the day.

Damien Creevy, Christopher Byrne and Tess Donovan, of the Lucan club, posted the best score of the first session with a superb 69 2/3. This held until the Lucan team of Sandra & Peter Keogh alongside Fiona Langan, posted the exact same score in the second session. Nobody else could get past this score so it went down to the b.18’s with Sandra, Peter & Fiona coming out on top by the narrowest of margins. Congratulations to them. 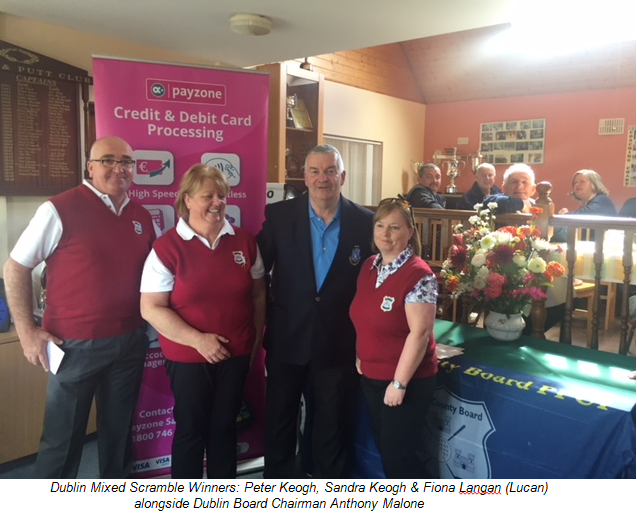 It wasn’t to end there for the Lucan club with the best gross on the day going to them also with a brilliant 86 from the Chairman’s team of Anthony Malone, Philip Sweeney & Tracey Smith.

The RGSC team of Miriam & Terry Salmon alongside Veronica Kynes picked up the 1st 18 Nett with the host club, Portmarnock, picking up the 2nd 18 Nett through the efforts of the Fitzpatrick family (Tony, Ann Marie and M Fitzpatrick).

Well done to everyone involved for making it a great day. Congrats to our winners and a big thankyou to our sponsor Payzone and the host club, Portmarnock, who gave up their course for a day and looked after everyone so brilliantly. Thankyou.