Over the past weekend the action came thick and fast as action place all around the province with National Mixed Foursomes Qualifiers, Scratch Cups and All Ireland titles all taking center stage.
UNDER-20’s
In Erry, Co.Offaly, the inaugural Under-20 All Ireland took place with a couple of young Dubs hoping to make their mark. Old Counties Ross O’Reilly had been in great club form in recent times and he continued that kind of superb scoring to post a score of -7. This though was not good enough to take the title as Cian Morrison from Douglas came in with a stunning -12 to win the cup with Ross in solo 2nd place. A great performance and a well done to Ross.
UNDER 16’s
The U-16’s were out of luck in both the singles and in the Inter County team event over the weekend but they can be proud of their efforts and it will serve the players and county with some great experience for the coming years.
OLD COUNTY SCRATCH CUP
The 2017 Old County scratch Cup won’t be remembered for record breaking numbers through the door or glorious weather but it will be remembered for a dramatic and high quality finish. The morning started with bright weather and very little wind and the early starters took full advantage.
Old County players were prominent at the top of the leaderboard with the holder Tom O’Reilly leading the way on -15, closely followed by Paul McGreal on -13 and Gary McGreal on -11. Paul Nolan has always been a loyal supporter of our scratch cup and following an enforced absence from the sport Paul too was back to his best shooting a 95 to lie joint 2nd.
Open organiser Kevin Bermingham is no stranger to being in the final shake up and he too played well to post a 96. Charlie Egan is finding his feet nicely in his new surrounds at O’Toole Park and following a 52 which should have been better, Charlie hit top form in his 2nd round with a 44.
George McGreal was highly impressive shooting a 45 in Lough Owel last Sunday and following a quiet period by his high standards George is once again hitting top form and he too positioned himself in the mix with a 96. Andy Lowe has made great strides this year and our club strokeplay champ and member of the Dublin Inter County team showed his class in the harder afternoon conditions to fire a 97 and make the top 12. Ian Dillon having won here in 2015 played well at the Ryston Scratch Cup yesterday and had his eye on the Bonus prize for best 72 hole gross. Ian started with a 50 and it looked like that might pave the wave for Lakeside’s Brian Cahill or Glenville’ Derek Courtney to win this battle, but Ian roared back with a 45 in his 2nd round and win the Bonus prize and lie 2nd going into the play-off. The previous two winners would be the final 2 ball when the players returned shortly after 5PM.
Elsewhere we saw a welcome appearance from the most decorated ladies player in the country Ger Ward, Ger on her birthday braved the elements for two rounds of 53 to win the Ladies 1 Prize. In the Ladies 2 section, our own Madeline Nugent was the victor edging out Deirdre Curran and Alice Sargent.The Gents Junior section saw a great battle with David Roy and Keith Potter, Dave shot 58 in his 1st 18 to Keith’s 56, but Dave 2nd 18 of 54 was enough to se him claim the top prize. Charlie Egan had comfortably made the play-off and he too could take comfort the Inter prize was secure irrespective of how the final 18 unfolded.
In the last round. The rain was teaming down as the players teed off, but thankfully it relented and a good crowd watched the action unfold. whilst many eye at the start would have been on the duo of Ian and Tom, attention quickly switched to George Mcgreal who started like a train and a rampaging Kevin Bermingham who started more slowly but 6 birdies on the spin saw his round gather great momentum. Gary McGreal, Brian Cahill and Paul Nolan all impressed as well with excellent rounds of 47.
However Kevin posted the score to beat -23 after a stunning 43. It looked like Kevin would finally land the top prize but alas on the 18th with George needing a birdie but off the green, the unthinkable happened and George chipped in to force the play-off. It was a hammer blow for Kevin but his showed his steel when the three hole play-off teed off minutes later.
Kevin pitched to within a foot of the 1st and with George at the back it looked like he would strike first, but George once again found the bottom of the cup with a pristine chip. Both players were less accurate at the 2nd but crucially Kevin went left as George was at the front. As Kevin chip went long, George sunk a very long putt and left Kevin chasing a tough par to keep his hopes alive. Sadly for Kevin he missed. Going down the final hole. Kevin pitched beside the pin, but George knew a par was good enough and he got the job done.
An appreciative crowd acknowledged the mammoth efforts of both players. George was once again the champ after an absence of seven years. For Kevin the wait continues. Kevin was good humoured at the presentation and George was highly appreciative of Kevin’s great efforts on a day he needed to be at his best to keep him at bay.

So a wondefrul end to a great scratch cup. The next stop in the Dublin Series will take the players to loughlinstown next Sunday. Thanks to all who supported, played in the  rain in good humour. A big thanks to sponsors National Autoparts whose contribution and support was greatly appreciated on a day when the numbers playing was far below what we had hoped. Our Grounds team too deserve great credit for all their work in testing conditions.

A huge thank you to Rob Ryan for the artivle and it is taken from the Old County website at: http://www.oldcounty.org/ 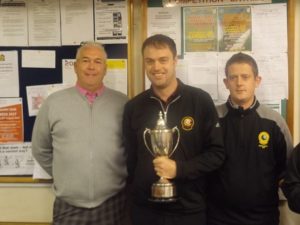