Over the past weekend, both the Dublin Ladies & Gents Inter County teams travelled to Ryston P&P Club in Newbridge, Co.Kildare in defence of the titles they had won last season.
On Saturday morning the Gents were out with the host county Kildare in the final groupings in the opening Scotch Foursomes. The team just like in the Leinster Inter County were lead off brilliantly by Chris Gallagher(Lucan) and Gary Healy(Loughlinstown) with a super round of -12. This was added to by Junior Smith (RGSC) & Stephen Murray (Old County) with another very good score of -9. The final pairing of George McGreal (Old County) & JR Crangle (Loughlinstown) also added to the score with a battling -8 to set a great team total of -29 to sit one shot behind the early leaders Limerick.
In the afternoon singles, Chris Gallagher once again started the team off with a brilliant score in the deteriorating conditions with a -6 round which was backed up by Gary Healy’s -5. Stephen Murray was next in with -2 with Junior Smith adding another -3 to the building score. -4 from George McGreal and -2 from JR Crangle left the lads on -49 a disappointing 11 shots behind the leading counties of Louth and Cork.
Just as the men finished their rounds, the ladies started their campaign with the first of their two scotch foursomes. Leading the team out, Sheelagh Elmes(Portmarnock) & Maree O’Toole(Shandon) got them off to a solid start with -3. The RSGC duo Siobhan Keeley & Glenda Hoey struggled in the driving wind and rain and could only bring in a score of +1. The team captain Ger Ward (Portmarnock) clicked into gear with her partner Ger Holland (RGSC) as they put in a superb round of -8 to get them within a shot of the leaders Kildare.
Another round of the scotch foursomes format was to follow as the evening weather continued to batter the Ryston club. Once again, Maree and Sheelagh put in a brave performance from the front with another consistent round of -4. The 2nd double pairing of Glenda and Siobhan improved their score from earlier with -2 while the final doubles partnership of the two Ger’s  shot a round of -6 to once again kept the team within touching distance of an ever growing gap to the leaders Kildare who had now gone 10 shots ahead with just the singles to come on Sunday morning.
The ladies singles were first for our Dublin teams with them taking to the course around 10 am. Taking on the home Kildare contingent with 5 Ryston members was always going to be tough and so it proved as they put in a consistent performance to romp away to the title. Some of our ladies will be disappointed with their performances but in truth, they have done all they could against a formidable opponent. Ger Ward once again lead the team with her score of -4 one of only 5 rounds under par in the ladies grade showing how tough the conditions were in the early morning wind and rain. 33 shots separated the teams at the end with the Dublin ladies just about holding off the Cork side by just 3 strokes.
In the afternoon it was the men’s turn to try and retain the Anchor Cup but they knew only a special performance would do so with them lying in 6th position and 11 shots behind. The foursomes have become a tough format in the Gents Inter County over the last few years with the Dublin team ably helped with our leagues playing that format. They once again helped the team as they put in 3 consistent rounds of -5 to give themselves a glimmer of hope going into the final singles rounds of at least a placing. The scoring now read Louth -78, Cork -72, Limerick & Kerry -66, Kildare -65 and Dublin & Wexford -64 with just 5 singles scores to count.
Chris Gallagher once again lead by example with a brilliant start of -8, he was quickly followed in by Gary Healy who shot -6. Junior Smith & Stephen Murray were also inspired and came back strongly on the back 9 to finish on -7 each and giving Dublin a glimmer of hope. George McGreal also added another two strokes to the total with JR Crangles score not counting. The team finished with a score of -30 for the singles and a final score of -94 which would prove challenging for all the other sides still on the course. As Louth’s battling performance started to come to a halt the Cork team started to grow in confidence. They calmly negotiated the final few holes despite some mishaps with Declan Freeman’s club head coming off and after a replacement was found he pitched superb shots to 16&17 ultimately confirming the Anchor Cup’s reacquaintance with the Rebels. A brilliant fight back by the Dublin team but also a superb performance by the Cork men who upheld their favourites tag with 5 shots to spare over both Dublin and Louth with Dublin grabbing the 2nd spot on the 6th card countback.
A 2nd place double for the Dublin teams. A great defence was put up by both teams and their dedication over the past few weeks has been second to none. All players can hold their heads high as they have contributed to a superb challenge in both Leinster and All Irelands. Well done to all and thank you to all selectors and supporters. 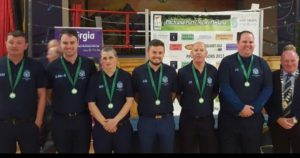