On a gloriously sunny day in Phibsboro, Ian Dillon put on a masterclass display to claim his 1st win in the scratch cup series. The Kildare man was one of only three players ( Paul Nolan & Stephen Murray) to make the play-offs in all four events so far and he continued that trend on Saturday to post a 94 (-14) and lie just two shots behind the joint leaders John Ross Crangle and Dennis Monaghan. Erins Isle winner Mark Millar looked like he was going to shoot very low but just like six days ago, he followed up a 44 with a second round 53 to finish on 97. Another Shandon man Keith Redmond who performed well in Dublin 11 last Sunday missed a putt on the 36th that cost him a place in the final 12 and more precious points. The play-off got underway with two men hoping to be vying for the National Seniors title on Sunday, Frank Ryan and Anthony Malone , they shot 53 and 50 respectively to complete their day. Eamon Gibney added a 47 to place him in the top six similar to his performance in Glenville three weeks ago. Mark Millar finished with a 46 and his score of 143 posted a good score for the leading pack to chase. Ierne’s John Dennis added an impressive 47 in his final round to finish on 142 and lead the way with three to finish. Ian Dillon starting out two shots behind made a blazing start with six birdies in a row and JR Crangle just could not make his putts count as the Kildare man threatened to run away with it, but as Dillon’s birdies dried up, local favourite Dennis Monaghan found his form on the back nine and he finished with six birdies. Dillon though responded to the threat and he too finished with three birdies to seal the win by two shots finishing with a closing 44. The win lifts Dillon to 2nd in the points table just nine points shy of the leader Stephen Murray who was unable to play due to illness. The next stop on the circuits is the penultimate event in CPM next Sunday and things are starting to tighten up with the finishing  flag in sight.
Elsewhere in Shandon. Charlie Egan posted a hugely impressive 96 to win the Inter prize and local player Ciaran Claffey took the junior prize with 116. The ladies winner was Chrissie Byrne who finished on 106. Maree O’Toole though leads the ladies event by six points from RGSC’s Siobhan Keely with Linda Thompson in third place. 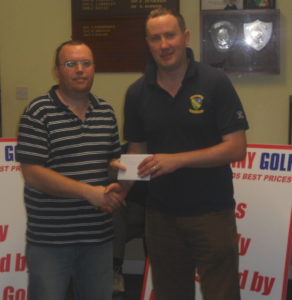