A journey that began in Ierne in April of this year and followed 8 Scratch Cups that lead into our final playoffs in Royal Meath today.

Some of the big guns of Leinster Pitch & Putt lead the way with Eamon Gibney leading the Senior Grade going into the day closely followed by Sean Goggin, Ian Dillon, JR Crangle and Ian Donnelly. Anyone of those knew, a win today would bring them the Senior title. For the other players just outside the top 5, they knew a win today could propel them to the top but only if the players at the top did not perform.

It was a similar story with the Inter grade as Barry Gorey led the way with Chris Cawley, Jimmy Quinn, Paul O’Rourke and John Tyrell all behind knowing a win today would give them the top prize.
It was a little more clear cut in the Juniors as Kevin Williams and John O’Keefe knew a win would give them an unassailable lead with Liam Nelis needing a reverse of the leaderboard to take the spoils.
A perfect afternoon was in store for players as a light breeze barely affected the ball and soft receptive greens. JR Crangle was to lay down a marker as he stormed to a first round 42 and claim an early lead with Eamon Gibney two shots behind with the help of a hole in one on the 7th. Ian Dillon also started well with 45 and Sean Goggin a 46. The top 4 had certainly risen to the challenge as Kevin Corcoran’s 47 was the best of the rest.
In the Inters, Chris Cawley also of Loughlinstown took the competition by the scruff of the neck with a superb 46 and a five shot lead over Paul O’Rourke who was aided by a hole in one of his own on the 8th. Barry Gorey finished his round very well with 4 birdies in 6 holes taking him to a 52 but Chris had other ideas for anyone mounting a challenge.
Kevin Williams took advantage of his home course, shooting 57 to take a shot lead over Liam Nelis. John O’Keefe found himself with a lot of work to do going into the final 18 of the DSCS.
JR Crangle started his 2nd round off just like his 1st racing to -17 for 24 holes but he was to come unstuck and a couple of 4’s cost him momentum as Sean Goggin tore through the field with a birdie blitzer, -12 through 14 holes saw him take the lead on -20. Eamon Gibney, like JR was to slow down after a quick start to his 2nd round but Sean was not for catching and a final birdie on the 36th hole of the day saw him come from behind and win both the daily and the overall series from Eamon and JR. Eamon would take 2nd spot on the day with his better 2nd round of 48 eclipsing JR’s 50. Ian Dillon would also finish sluggishly for his 97 but he was still able to hold onto 4th spot in the series. Gary Healy would fire a final round 48 to just nab 5th spot overall. Kevin Corcoran would finish his day with a 96 to be best of the rest with Thomas Ryan shooting 97.
Meanwhile, Chris Cawley was continuing his fine afternoon with 6 birdies in 7 holes giving him another round of 46 to finish a stunning -16 on 92. Paul O’Rourke was also shooting 6 birdies in 7 holes but he had no more to give as he matched Chris’s 2nd round and a final total of -11. Jimmy Quinn was to bounce back after a disappointing opening 55 with a brilliant 48 to finish joint 3rd on the day with local man Daniel O’Toole. Barry Gorey though was to just nab Jimmy for 3rd overall as a single point is all that separated them at the end.
The Junior Grade was still up for grabs going into the final 9 holes with Kevin Williams holding off the challenge of both Liam and John. Kevin though was to finish the series in style with a final birdie on the 36th and last hole of the DSCS Season giving him a final total of 112 and a 3 shot victory over Liam Nelis. John O’Keefe will rue a bad start as he found birdies very late in the day to finish in 3rd spot on the day but he hung onto 2nd in the series.
Congratulations to all the winners today, throughout the season and a huge thank you to all that took part in the 2018 DSCS. A total of 61 players took part overall and hopefully next year, more will enter and make it a bigger, better competition for all in 2019.
Thank you to the Dublin County Board, Pauline of Holistic Massage Therapy Finglas for the sponsorship and to Ierne, Loughlinstown, Lucan, Portmarnock, Old County, Glenville, Trim and Royal Meath for the use of their courses throughout the year and their Scratch Cups.
See you all once again in 2019
JR Crangle 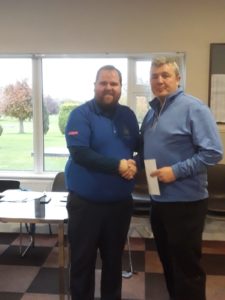 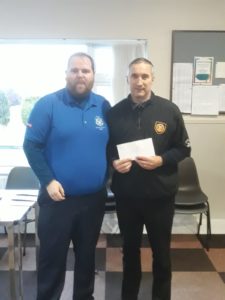 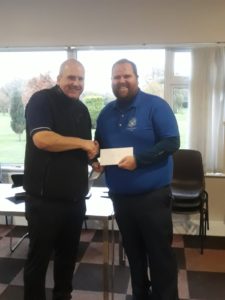